This interactive piece visualizes a 1960s-era mathematical formula for constructing ‘free-form’ surfaces from four boundary curves and pays homage to its early application in the automotive and aerospace industries.

This work was conducted as a research assistant for Professor Daniel Cardoso Llach of Carnegie Mellon University School of Architecture's Computational Design program. 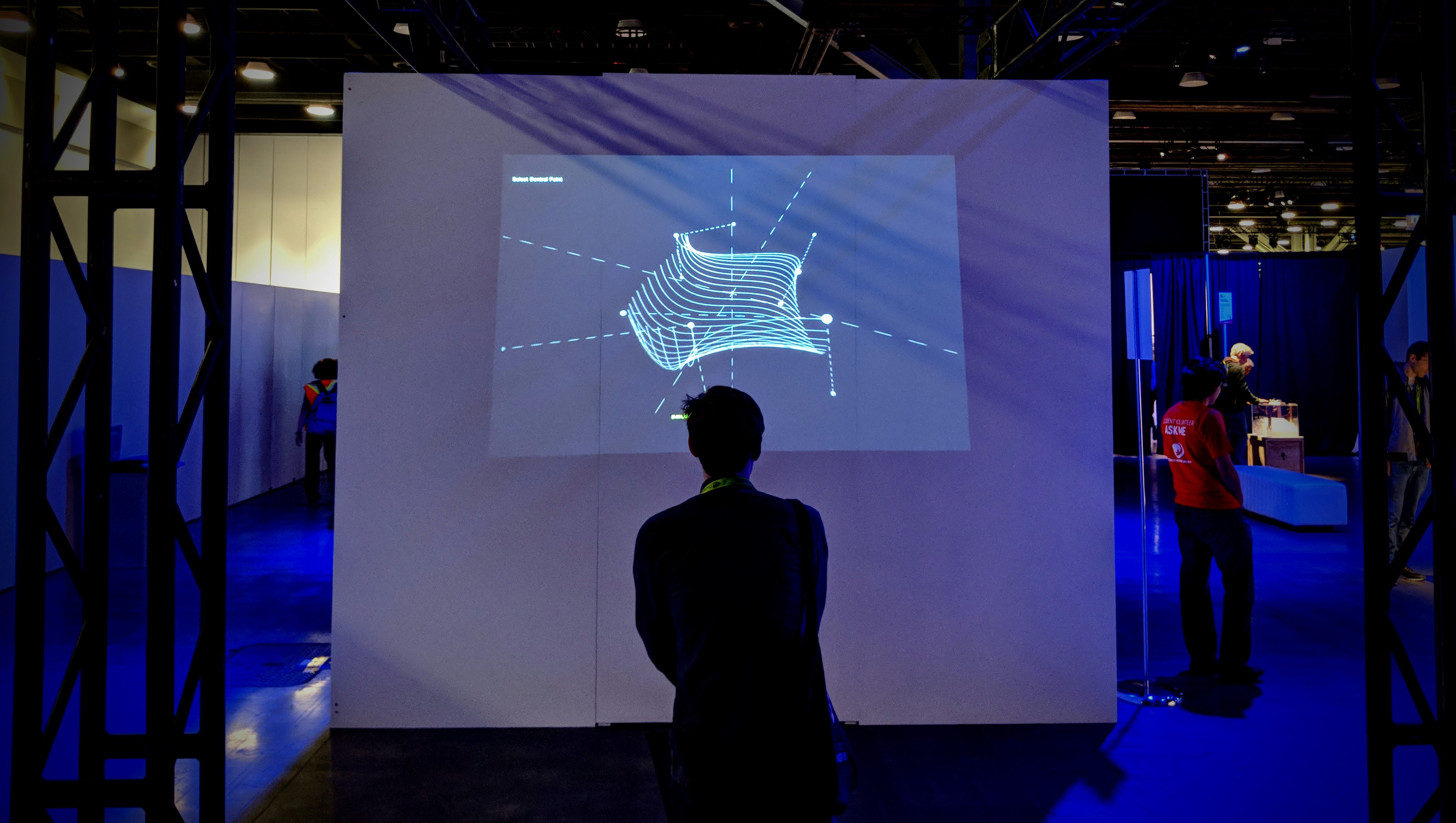 A visitor at the Coons Patch reconstruction at SIGGRAPH 2018 in Vancouver, BC.

This interactive software program, written using Three.js and WebGL, visualizes a mathematical formula for creating freeform, 3-dimensional surfaces. The formula, which takes in four boundary curves joined at the endpoints, produces from them a surface called a Coons patch (named for mathematician and designer Steven A. Coons). Coons patches, or surfaces, provide a succinct digital representation of complex forms. They are defined by the parametrization of the surface’s boundary curves (just a few 3-dimensional points, like a Bézier curve). In this software program, the interface reveals the underlying mathematical structure behind these elegant surfaces, and allows non-technical users to interrogate the relationship between the two.

A surface is presented as a grid of white curves on a black background, paying homage to videos from the early 1970s from the Ford Motor Company’s work using Coons patches. However, where the designers at Ford had to manually encode each coordinate of all the points on the boundary curves inscribing the surface, users of this software benefit from a more embodied experience. For example, a single button ‘morphs’ the surface from its current state. Morphing lets a user quickly see some of the many possible forms a Coons patch might take.

A Coons patch being morphed to visualize various surfaces 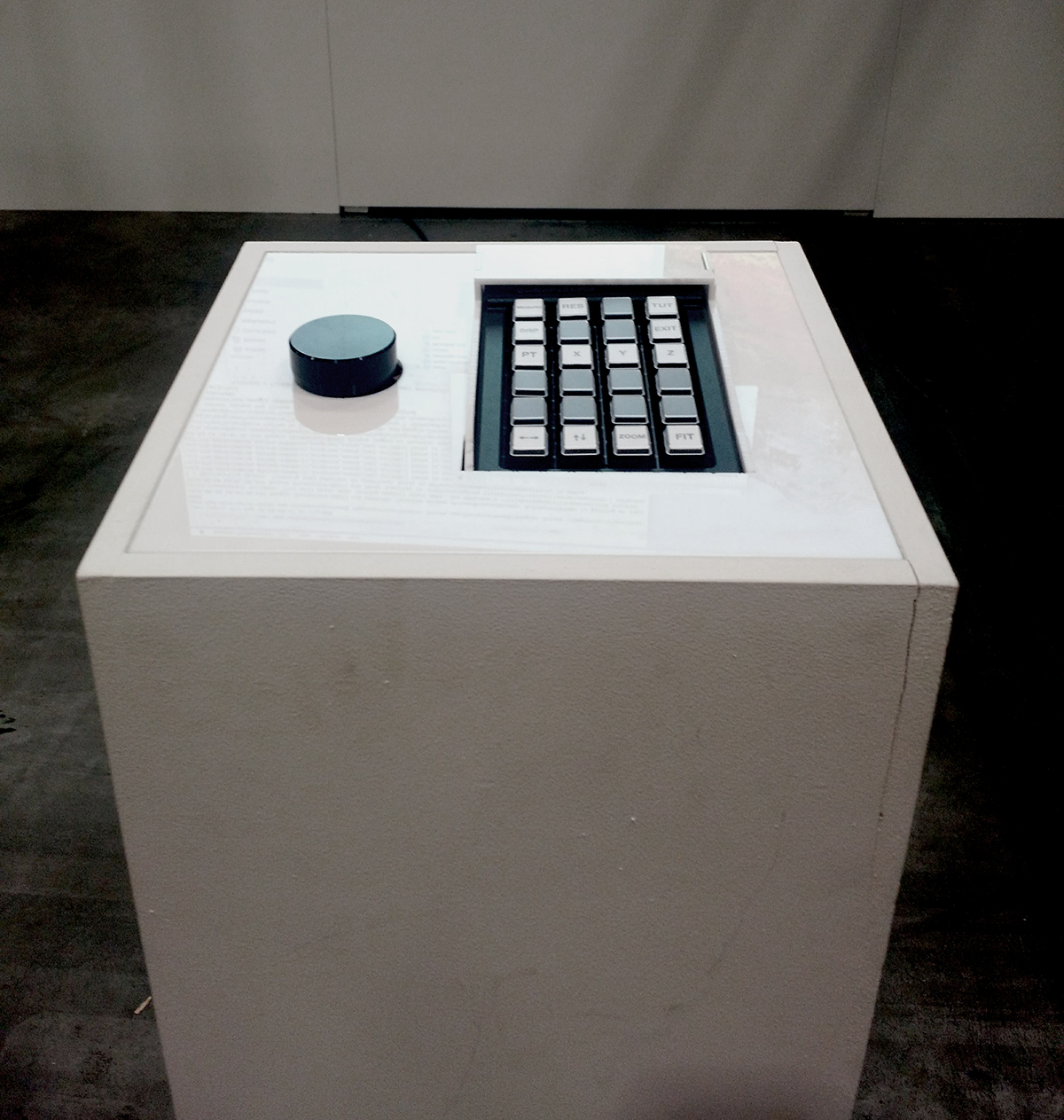 The interface also features a point toggle and the ability to move individual endpoints or control points. Whereas morphing the surface presents a new, random surface, with the point toggle a user gains a fine-tuned level of control over the form. By turning on point controls and toggling through the endpoints and control points, the user can select the ones that are closest to the region they want to adjust. Then, they can choose an axis (x, y, or z) along which to move the point, using a tactile control knob. Minute adjustments of a point along an axis affect the area closest to that point, while more extreme adjustments affect almost the entire surface. The whole time, the coordinates of the point the user has selected are displayed, revealing the mathematical representation behind the points, curves, and surface, as well as allowing the user to examine the relationship between numeric values and geometric form.

With the goal of critical engagement with the Coons patch, a degree of awkwardness and interruption in the user experience is more memorable and helpful than a perfectly seamless interaction. In fact, fiddling with a single endpoint or control point — moving it along the x-axis, then the z-axis, then a bit back on the y-axis — is very similar to the experience of a beginner programmer, manually experimenting with variables and loops, or that of a designer slowly gaining expertise with a 3d modeling software. The Coons patch formula, supported by its proof, and a few illustrations of unique surfaces might provide an abstract, factual knowledge of how it works, but having an embodied interaction brings about a deeper understanding and helps to engender a mindset of critical questioning.

The Coons Patch reconstruction has been presented at the following events: